The human soul is continually seeking to realize its true being and fulfill its purpose in life. This can be seen not only in each individual’s yearning to realize to the fullest the potentialities inherent in his or her being, but also in the unfoldment of our collective being towards the highest expression of human existence. The consciousness of humanity is awakening to the interrelatedness of all life, and this is reflected in the new holistic understanding of the universe emerging in all spheres of human experience today. We can see this trend in the growing concern for the ecological balance of our planet, interest in holistic health, a deeper social conscience concerned with the plight of suffering people all over the earth, and a growing awareness of the one underlying truth brought forth through all the religious traditions. At the same time, recent scientific discoveries are disrupting established concepts and models of the universe. In physics, biology, medicine, and psychology the very foundation of our notions about life is being superseded by the realization that we are both a fraction of the universe linked with all other fractions by resonance, and also the totality, as every cell of our body contains the code of the whole universe.

This view, in fact, corroborates the vision of the mystics throughout history who have peered beyond the frontiers of their separate and limited personal perspective to encompass the vaster reality of the whole. This is the way of the Sufi, which views life in the light of the one essence behind the surface of life, that essence revealed by all the religions. The Sufi path was brought to the West from India by Hazrat Pir-o-Murshid Inayat Khan, who founded the “Sufi Order in the West” in 1910. Thus, the ancient wisdom derived from the rich spiritual traditions of the East is merged with the attitude of the West in its tradition of logic and technology, in order to bring about the true union of the human family. Pir Vilayat Inayat Khan, eldest son and successor of Hazrat Inayat Khan, continued this line of guidance for the evolving world, bridging and integrating the different forms of knowledge in the light of an awakened vision of the fulfillment of God’s purpose for creation. In our time the realization of the mystic incorporates the dimension of a collective awakening. The total being that we are is experiencing a new step in the evolution of life on the planet.

The good tidings that the Sufi Message brings to the world is the recognition of the Divine in the soul of the human being. Humanity is one body, the whole of life being one in its source and in its goal, its beginning and its end.

If one could only see how marvelously, in the diversity of the conception of the Divine Ideal, wisdom has played its part, guiding the souls of all grades of evolution towards the same goal, which in the end becomes spiritual attainment!

Through all channels, wisdom must flow.

The Message is to make humanity conscious of the words in the Bible, where it is said “We live and move and have our being in God”, to realize this and recognize the kinship of humanity in the realization of God.

This is not the time to advance any particular sect, church, or belief. We have too many sects. They are only outer forms. The things that really matter are deeper.

What Hazrat Inayat Khan calls ‘the awakening of the soul of humanity to the consciousness of the divinity of mankind’ is something that is happening on a large scale and we are part of it. Consequently our meditation can no longer be confined within our person, even to liberate ourselves from our person, because together we constitute a reality that is more than the sum of the parts……This is God manifesting in our midst, in the convergence of our souls.

The most meaningful thing in life is that something is gained by existence, by the interfacing of us. The heavens are enriched by the experience of the earth; in other words, God is enriched by His/Her experience in becoming human. Thus, the new orientation of the Sufi is emphasized in Hazrat Inayat Khan’s teaching on the art of personality and God’s fulfillment in existence in and through human beings.

The purpose of the person (man) is like the horizon: the farther one (he) advances, the farther it recedes. There comes a time when one discovers a cosmic purpose beyond one’s personal purpose. This realization was outlined by Hazrat Inayat Khan as the motto of this age: ‘the awakening of humanity to the divinity of humankind.’

*
You, the Ultimate Reality, are All in All.
Atheism confesses the ineffability of Your Essence.
Polytheism personifies Your manifold Attributes.
Monotheism witnesses the unity of Your Being.
In every God-Ideal an emanation of You shines forth.
The heart receives of You as much as it can contain.
When the heart is supple it is capable of every form.
Then Your manifestations surpass the limitations of belief.

Link to the Website of the Sufi Order International

Reflections on the Federation retreat 2015 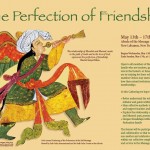 Two weeks ago the annual Federation Retreat was held at the Abode, the gathering of six organizations originating from the teachings of Hazrat Inayat Khan. About 50 people attended, mostly leaders and teachers, with the majority from the Sufi Order and the Ruhaniat. Here are some impressions; I assure you others would have a very different perspective.

This was the thirteenth of these Retreats I’ve attended, if memory serves, and the mood was noticeably different. Over years, with much struggle, we have developed great mutual respect for each other, but this time from the start the sense of unity was palpable and the atmosphere was much warmer, much more loving. It was quite remarkable, and reflected the title “The Perfection of Friendship.” The main topic was comparing our methods of training teachers.

The facilitators set three ground rules for the gathering: no using titles such as Pir or Murshid, no discussion of the politics of our organizations, and no having fun (joke). The avoidance of politics stemmed from the original premise of these gatherings, that we could gather in friendship and could build trust if we avoided discussion of the conflicts between our organizations. This was the premise that allowed us to gather in the first place and led eventually to this great success.

The content was presented in ways to encourage conversation and questions. We used two person panels and we used fishbowls, which many of you are now familiar with. We also spent time in small groups, including groups that met daily with the same people each time. These were especially moving and set up a level of intimacy that pervaded the four days.

Especially enjoyable was the opportunity to spend time with so many major leaders. By my count there were maybe four or five Pirs of different groups present (the titles are unclear) and many murshids and murshidas. One morning we gathered outside the meditation hall in the grass and formed a circle to do the purification breaths. Then everyone at one time was asked to make a sound expressing their current attunement. I made a sort of releasing/relaxing sigh, mixed with a bit of a groan. Well, next to me Pir Shabda broke into a kind of laughing giggle, as if life was the most delightful and amusing thing in the world. Soon those around him were caught by this contagious giggle. Then the whole group was asked to merge their sounds with what they heard around them and after a few moments the total sound resolved into an Om.

Another time I had a chance to ask Suhrawardi a question that’s been on my mind for years, how he maintained such a serene attitude during those five years as Secretary General in spite of all the stress and tension. He said he did Al Mahdat Murshid whenever problems arose. He also kept saying over and over again, it will be all right it, will be all right.